As yourself if any of the women depicted in this video (hat tip gCaptain) celebrating their careers would have advanced the way they have if they had not had a true Sea Year.

Remember that under the SCCT protocols developed in 2017, midshipmen were proceeding on Sea Year with substantial safeguards against sexual assault and sexual harassment—protections not available to them when they graduate. Now, they are not getting that “sheltered” experience on commercial, operating, ships; yet, when they graduate, they are embarking on those vessels without having had that experience. A thinking person would recognize that this makes them more vulnerable to SASH as junior officers aboard ships.

Updated to add this link to an editorial by Ally Cedeno, ’08:  National Maritime Day: Why are We Still Asking if Women Belong at Sea?

Another update:  A reader directed me to this Maritime TV video of current women midshipmen talking about the value of Sea Year.

Bravo zulu to the U.S. Merchant Marine Academy Alumni Association and Foundation for producing the first video and releasing it on National Maritime Day. And bravo zulu to “Dr. Joy and Company” for producing the second video.  And check out this website the USMMAAAF is hosting.  I particularly like this screenshot I captured from the website: 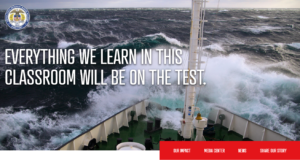 Although this one is excellent too: