Second in a four part series.  Part 4 ties it all together and shows how USMMA midshipmen and sea year are casualties in MARAD’s quest to get funding for state school training ships.

In our last post, we promised to reveal our answer to this Legislative Mystery:  Why would a proposed amendment to U.S. law that would protect the state maritime schools if their training ships were incapacitated — and protect SUNY Maritime when it’s training ship is decommissioned in 2019 — be deliberately dropped from the legislation before the Senate voted on it? Today we answer that question; tomorrow we show how MARAD was willing to sacrifice USMMA’s sea year to further its goal of funding the state ships.

The training ships used by the state maritime schools are aging and need to be replaced. SUNY’s ship is the oldest and will age-out in 2019. MARAD, which currently loans federally owned ships to the six state schools, wants Congress to bail out the states and fund new ships at a cost of $300 million each, or $1.8 billion dollars (before cost overruns) for six. MARAD and the state schools have been trying to get the bailout funding for at least three years; but, so far they have not persuaded Congress to fund the bailout. Consequently, MARAD’s unelected bureaucracy has set about to create a crisis so that Congress will be forced to do MARAD’s bidding and fund new training ships for the state schools.

One of the biggest hurdles the states must overcome to persuade Congress to fund these ships (in addition to the basic question, “Why should the federal government fund a major capital investment for six state schools?”) is that few cadets from those schools graduate with a merchant marine obligation and military commitment. Only state school cadets who receive a tuition stipend from the federal government incur such an obligation. MARAD annually budgets for only 75 students (from all six state schools combined) to take the tuition stipend; but, MARAD rarely comes close to filling those 75 slots. In 2010, for example, only 38 graduates took the stipend, of which 4 were SUNY graduates. $300 million for a new SUNY training ship is a lot of money to spend on four students per year.

In contrast, every one of the approximately 225 graduates from USMMA graduate with USCG licenses and a merchant marine obligation/military commitment (and it is a longer obligation/commitment than the one imposed upon the state school students who receive stipends.) Thus, from a cost perspective, it would be far less expensive – and faster – to expand enrollment at the Academy by 75 midshipmen instead of building six new – very expensive – state training ships, the first of which could not be launched before 2021 at the earliest.

Over the past several years, MARAD, the state schools and their lobbyists have grown more creative in their efforts to persuade Congress to fund the school ships. For example the training ships were recast as multi-purpose ships that would be equipped to respond to natural disasters in addition to serving as training platforms. They have produced slick videos to try to move the needle in their favor:

There are two steps to getting funding from Congress — (1) getting the money authorized and (2) getting the money appropriated. After an extensive lobbying campaign this past Spring, the schools were successful in getting legislation introduced in the House of Representatives that would authorize $85 million towards the first ship — a ship designated to go to SUNY Maritime. However, efforts to get an appropriation for the ships keep falling short.

In a time of budget shortfalls and expanding federal deficits, it is difficult to pry money loose from Congress. Even genuine crises like natural disasters and the Flint, Michigan water situation can get stalled in Congress. Without a crisis attached to the funding for the state school ships, the funds are unlikely to be forthcoming.  With the first ship designated for SUNY, the crisis that the state schools are relying upon is the impending decommissioning of SUNY Maritime’s training ship with no replacement in sight.

In less than three years, SUNY Maritime’s training vessel will be decommissioned; and it could be taken out much sooner due to an engine room casualty or failing a USCG inspection. This is a legitimate concern and needs to be addressed. As we explained in this post, the ability of the Secretary of Transportation to create a short-term solution to SUNY’s problem mysteriously disappeared from Senate Bill 2829 between the time the bill was introduced in April 2016 and when it was voted on by the Senate June 2016. The only stakeholders that could care about this amendment are the state maritime schools. But why would they want to remove this language? The state school’s motive provides the answer to the Legislative Mystery:

Because the amendment would have removed much of the urgency about replacing the aging fleet of training ships.

Without the amendment compelling ship sharing, MARAD and the state schools can argue to Congress that the training ship bailout is necessary to address an impending crisis. This is known as manufacturing a crisis to bring about a result.  Contributing to this manufactured crisis, MARAD has reportedly informed SUNY that it will no longer fund maintenance for SUNY’s training ship in FY2017 and future years.

The six state maritime schools are organized and want “their” new ships built with a bailout from Congress. Why should we care? Because, as we will demonstrate tomorrow, MARAD  destruction of USMMA’s sea year serves to escalate the crisis and thereby put more pressure on Congress to fund the state school ships.

The state schools are already  using USMMA — and faux concern about USMMA midshipmen — in their messaging to justify funding the ships. Check out the following Sept. 10, 2013 testimony of Mass Maritime’s president “on behalf of the Consortium of State Maritime Academies” and suggesting that “the federal government pay[] for the hull, machinery and navigational systems” on brand new training ships:

“Without training ships, the academies would be forced to send cadets out on commercial vessels to obtain their required sea time. This would put a significant strain on all the academies, including the U.S. Merchant Marine Academy, due to the limited number of available commercial vessel berths.”

But as we will demonstrate in our next post, MARAD is willing to use USMMA’s sea year in a far more destructive fashion to achieve its three-year quest to fund the state school ships before Chip Jaenichen’s tenure as Maritime Administrator runs out on or before Inauguration Day.

Someone pointed out that in the SUNY Maritime video posted above, they slipped an inside joke in against USMMA at 15 seconds into the video: 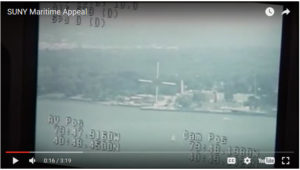 They’ve got Kings Point acquired as a target.  But I’d suggest shifting the target more to the right — to the Northeast corner of Wiley Hall, second floor.