At homecoming, Superintendent Helis made a State of the Academy presentation to the Alumni.  It included this slide: 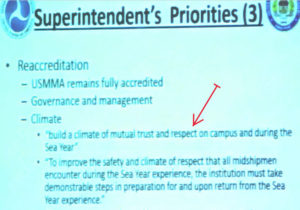 Helis said that the quotes on this slide came from the MSCHE Accreditation Report. The photograph isn’t the best, but the first statement under “Climate” is in quotation marks and says

Now I’ve already chastised Helis for misquoting the Accreditation Report — and my $100,000 bet is still safe.  Yet he is still at it. You will not find the above quote in the report.

You will find that Middle States  said that the Academy needed to “build a climate of mutual respect and trust among midshipmen, faculty and staff with respect to sexual assault and sexual harassment.”  But it didn’t mention that the problem was related to sea year.

So my message to Superintendent Helis:  If you want to start building a climate of mutual respect and trust — stop telling the midshipmen that the report says something that it doesn’t say.

And my message to anyone who cares about making sure that the Academy does not lose its accreditation: We need someone spearheading the response to the accreditation report who isn’t blinded by a hidden agenda. It won’t do the Academy any good when Helis reports to the accreditation team:  “I fixed the sea year problem” and the team responds, “That wasn’t the problem and by repeatedly telling people that MSCHE said something that it didn’t say, you further eroded mutual respect and trust on campus rather than improving it.”