Prosecutors love a coverup attempt because proof of the attempted coverup can be evidence of guilt of the underlying crime. For example, why would someone who is innocent of a murder hide the murder weapon? It was with a prosecutor’s eye that we watched last week as LMI tried to “unerase” some of the tracks it had previously hidden relating to Marlise Streitmatter’s role at LMI.

The erasing of the Streitmatter tracks:

Before going to work for LMI, Streitmatter had been the number four person in the Department of Transportation and the key point person at DOT for all things related to USMMA. One would think that LMI would proudly tout Streitmatter’s status as its employee. But, as we observed, LMI appeared to have scrubbed Streitmatter from its website.  A Google search revealed her historical presence on LMI’s blog, but she had been removed from the actual blog.

There are two reasons why LMI would not want people to know that Streitmatter is its employee. First, there is evidence that LMI was pre-selected or “wired” to get the contract to conduct a culture study at USMMA. The contract was supposed to be competitively bid. But, word leaked out — even before the deadline for submitting bids had closed — that LMI was going to get the contract. With people trying to figure out why LMI was wired to get the contract when it appeared to have no particular expertise in conducting sexual assault culture studies, knowledge that Streitmatter was an LMI employee would have undoubtedly caused people to speculate that her connections to DOT were the reason for the wire.

Second, as we demonstrated in a follow up post, Streitmatter, who is assisting LMI with the culture study, has two blatant conflicts of interest:  (1) the contract requires LMI to evaluate the leadership at the Academy but Streitmatter was directly involved  in hiring that leadership; and (2) the contract requires LMI to examine the issues surrounding sexual assault and sexual harassment (“SA/SH”) at USMMA including the reasons why midshipmen might not report SA/SH. Yet, Streitmatter was part of the senior leadership in the Office of the Secretary of Transportation at a time when that office forced the resignation of MARAD’s chief legal counsel because that individual asked the Inspector General to investigate SA/SH at USMMA. Thus, a very plausible reason why midshipmen might be reluctant to report SA/SH is because they witnessed what happened to MARAD’s chief counsel when she tried to address SA/SH.  One can readily see why DOT and MARAD would want LMI and Streitmatter to be in a position to direct the outcome of a study that will exonerate those agencies from their role in creating a climate where midshipmen might be reluctant to report SA/SH.

On November 13, 2016, we broke the news of Streitmatter’s involvement in our post, the LMI Scandal Unfolds. That post called attention to the fact that Streitmatter had been scrubbed from LMI’s website. Two days after we broke that story, LMI restored the missing blog post (the one referenced in the Google search).  LMI “unscrubbed” Strietmatter. Unfortunately for LMI, we had taken screenshots of the scrubbed LMI website. Annotated screenshots of the website (reproduced at the end of this post) taken on November 12, and again on November 17, show how LMI is trying to cover its tracks and  make it look like it never scrubbed Streitmatter from its website.

Originally, one might have been tempted to attribute innocent motives to the removal of Streitmatter from the LMI website.  But then — after we revealed the conflicts of interest and the motive for scrubbing Streitmatter from the website — LMI tried to “unerase” the scrubbing. It tried to cover its tracks. Which would allow a jury to infer that it the reason for the scrubbing was for an improper motive. 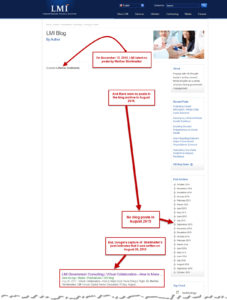 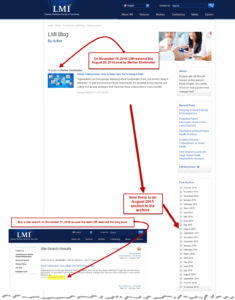