Today’s post is an exposé on how MARAD has begun the deliberate dismantling of USMMA’s Sea Year. In a follow up post, we will explore MARAD’s motive for harming the world’s premier merchant marine training institution and who benefits from its insidious actions. In the first part of this series, I explained what was meant by Sea Year aboard a commercial ship and the four basic categories of U.S. flag, commercial ships that Academy midshipmen have traditionally sailed upon in their Sea Year: 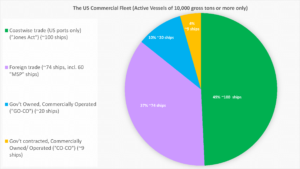 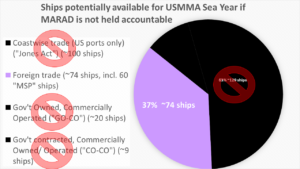 I don’t lightly make the claim that MARAD is intentionally doing this.  Let me prove it to you.

First, let’s step back to when MARAD released EMBARC.  At that time MARAD wrote—in very fine, low contrast, print barely visible at the bottom of the EMBARC page—that only the 60 ships in the MSP program were eligible to apply.  That meant MARAD told 143 ships not to apply. Here’s a screen capture from MARAD’s website as preserved by the Internet Way Back Machine on December 28, 2021 (click to embiggen).

MARAD has doubled-down on keeping ships out of EMBARC since then.

Now let’s look at the EMBARC proposal that MARAD just published in the Federal Register. If you scroll down to the “Background” section, MARAD tells us

As a prerequisite to employing USMMA midshipmen as cadets aboard their vessels, MARAD expects commercial vessel operators to evidence implementation of EMBARC and to sign the EMBARC Statement of Compliance.  [Emphasis added.]

What that means is that if a commercial ship owner does not voluntarily adopt EMBARC, MARAD will not allow midshipmen to sail on those vessels. But, if you scroll down further in the Federal Register, you will find that MARAD has limited the vessels that are eligible to adopt EMBARC but in a much more devious manner than December’s “only MSP ships need apply” statement.  Here is what it says:  :

EMBARC standards apply to owners and operators of vessels subject to the International Convention for Safety of Life at Sea 1974 (SOLAS). However, MARAD seeks comments and recommendations related to applying EMBARC, or substantially similar standards to vessels not subject to the Convention. [Emphasis added.]

That language—”subject to” SOLAS—was very carefully chosen by MARAD. A ship sailing from any U.S. port to any foreign port is required to adhere to (i.e. “subject to”) SOLAS. Those are the ships shown in lavender in the two graphs above. But here’s the Catch-22:  A ship traveling from Houston to New York is not required to adhere to SOLAS.  And because it is therefore not “subject to” SOLAS, MARAD won’t let the owner of that ship qualify for EMBARC and therefore that ship is not permitted—by MARAD—to carry Academy midshipman on Sea Year.

But does the ship that is not “subject to” SOLAS fully comply with SOLAS?  Absolutely it does.  And, if compliance with SOLAS is the standard for eligibility for EMBARC, it makes no sense to eliminate an entire category of U.S. flag commercial ships that are fully compliant with SOLAS simply because they aren’t “subject to” SOLAS. Would it not make sense that if this ship is in compliance with SOLAS (as certified by the USCG or a classification society) that it can take USMMA midshipmen?  Absolutely it would – unless the goal is to make sure it never does.

Ostensibly, the reason that SOLAS was selected by MARAD as the vehicle for deploying EMBARC is because SOLAS requires ships to have a “Safety Management System” (“SMS”) into which the vessel’s EMBARC standards can be incorporated. A ship’s SMS is subject to auditing by the U.S. Coast Guard and vessel classification societies such as the American Bureau of Shipping. Using the existence of an SMS to deploy EMBARC makes sense from a bureaucrat’s point-of-view: It lets the bureaucrat “set it and forget it” because someone else will do the auditing for you. And MARAD doesn’t want to do any work it doesn’t have to do.

Ships that are “subject to” SOLAS are not the only ships that have SOLAS-compliant Safety Management Systems. In fact, all of the vessels in the charts above (with the exception of 16 Great Lakes vessels that are special cases)—whether “subject to” SOLAS or not—have a SOLAS-compliant SMS because they sometimes do go on voyages (such as to foreign ports)  where, by law, they must comply with SOLAS.  No vessel owner wants to lose the flexibility of being able to sail foreign by failing to comply with SOLAS.

Yes – all 185+ commercially operated, ocean-going, ships that were used for Sea Year before EMBARC are SOLAS approved and have certified Safety Management Systems in place. But MARAD has deviously removed 63% of them from eligibility for EMBARC and therefore made them unavailable to USMMA midshipmen for their Sea Year.

It’s important to understand that SOLAS is not something that a shipping company can turn off and on depending upon whether or not it is on a foreign voyage. SOLAS has extensive requirements relating to the construction, equipment, and operation of a vessel. We are talking about things like compartmentation of a ship with watertight doors; radio equipment; lifesaving gear; and, yes, a SMS.

A ship is certified as SOLAS-compliant every five years and is subject to inspections by the USCG or a classification society on at least an annual basis. Thus, it doesn’t matter whether vessels “not ‘subject to’ SOLAS” are on foreign voyages; they are still every bit as in compliance with SOLAS as are vessels that only sail to foreign ports. Every one of these “not ‘subject to’ SOLAS” vessels has a SMS system that allows it to be in compliance with SOLAS.

If the criteria for allowing Academy midshipmen on ships is that that the ship have a SMS so that EMBARC can be incorporated into the SMS, then the entire US Fleet (except for the 16 Great Lakers) should be eligible for EMBARC.

If MARAD made one modification to its arbitrary “subject to SOLAS” standard—simply state that any ship with valid SOLAS certificates may apply for EMBARC instead of limiting it to vessels that are “subject to” SOLAS—then it would still accomplish its goal of having EMBARC incorporated in the vessel’s SMS.  But look at how it would open up ships for Sea Year: 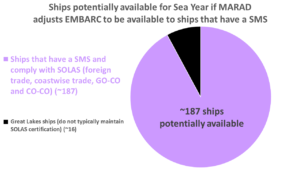 Now why wouldn’t MARAD do that? Stay tuned to learn why MARAD is trying to destroy Sea Year aboard commercial vessels . . .