In Part 2 of this series, I demonstrated that MARAD was deliberately dismantling USMMA Sea Year by applying an artificial restriction—”subject to SOLAS”—on vessels that could apply for EMBARC (the new standards MARAD imposes on shipping companies before it will place a USMMA midshipman on a ship. This artificial restriction made 63% of Sea Year’s large commercial ships (>10,000 gross tons) instantly ineligible for Academy midshipmen’s Sea Year.  The restriction is artificial because virtually every one of these  vessels is fully-compliant with SOLAS even if not “subject to” SOLAS.

The sequence of events I describe below will require some patience to follow.  I’ll summarize it now: Before USMMA Sea Year was cancelled in October 2021, there were 200 commercial ships available to train USMMA and state maritime school students.  With the release of EMBARC on December 15, 2021, there were 129 commercial ships available to train state maritime college students immediately and a maximum of 74 commercial ships which could, possibly, some day, be approved by MARAD to take USMMA midshipmen.  And that may never happen.

I concluded Part 2 with the teaser, “Stay tuned to learn why MARAD is trying to destroy Sea Year aboard commercial vessels . . .”

To solve crimes, the police often look to see who benefited from the crime, especially financially. The phrase “Cui bono?” or “who benefits?” describes that thought process.  It is an apt question with respect to figuring out the motive for limiting EMBARC eligibility to vessels “subject to” SOLAS.

To understand MARAD’s motive to cut 129 ships from being ‘EMBARC eligible’ for USMMA Sea Year, you have to ask the question, “Cui bono?” [“Who benefits?”].

Let’s start with this December 7, 2021 draft of the EMBARC policy created by MARAD: 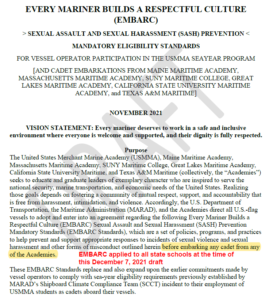 Interesting.  On December 7, 2021, EMBARC applied to ALL of the state maritime schools. (A full copy of the December 7, 2021 draft can be found here.) Critically, if you scroll to the bottom of the first page of the draft, you also find the following: 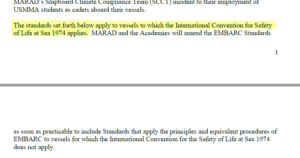 So at this point, EMBARC applies to vessels to which SOLAS “applies” rather than vessels “subject to” SOLAS.

One week later, we have a December 14, 2021 announcement of support for EMBARC from the presidents of the six state maritime schools:

“We fully support the Sexual Assault and Sexual Harassment (SASH) Prevention Mandatory Minimum Standards articulated in the Every Mariner Builds a Respectful Culture (EMBARC standards) for U.S. flag SOLAS vessels engaged in international trade. We believe these standards will help ensure a safe and healthy work environment for our cadets onboard these vessels.” [Boldface added.]

This demonstrates that way back on December 14, 2021, the State Schools knew that EMBARC was going to be interpreted as only applying to SOLAS vessels engaged in international trade:  The 74 ships in the pie chart above. And this language is dramatically different from the December 7 draft of EMBARC (vessels to which SOLAS “applies.”) With that change in language, 129 ships are no longer “eligible” for EMBARC. But, since the December 7, 2021 draft EMBARC policy says that it applies to the state school students along with USMMA midshipmen, it affects the state schools, too—Right?.

The timing of the December 14, 2021 letter from the state schools is also interesting, since MARAD made the announcement that included the new SOLAS language public two days later. [Link is to the Internet Way Back Machine; scroll down to the bottom of the page at the link and notice the page was last updated December 16, 2021.]: 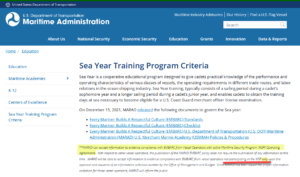 [MSP ships only sail on international voyages and are “subject to” SOLAS.]

So now we know why the state schools came out with an endorsement of EMBARC:  When MARAD deliberately limited the eligibility for EMBARC to vessels “subject to” SOLAS AND simultaneously removed the language that required state schools to keep their students off of any ship that had not adopted EMBARC, MARAD made the 129 U.S. flag ships (>10,000 gross tons) that don’t normally sail on international voyages unavailable to USMMA students yet fully available to state school students. What a sacrifice those state school presidents were willing to make!

Now let’s jump ahead a month-and-a-half to January 28, 2022 when SUNY Maritime’s president, Admiral Alfultis, is briefing SUNY students on the status of sea time in Summer 2022. The full video is here, but you can stick with the screenshots and clip, below.  Starting at the 13:26 mark in the full video, Alfultis is talking about “cadet commercial shipping”:

“We very much want as many of you as possible to be able to participate in this really valuable training experience.”

“We are facing a situation this summer where we have more of you interested in cadet commercial shipping than we potentially have available commercial berths. So
demand exceeds commercial capacity.” 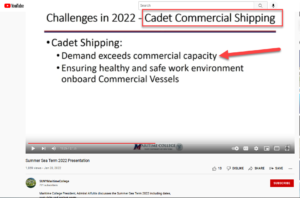 We now know that one state school alone (and there are six) wants to place at least 100 students on board commercial vessels and the need is so great that it exceeds the supply.  Alfultis’ goal for his one school alone is at least 100 students (e.g., 50 ships at 2 students per ship) whereas right now, as I explained in Part 1, Kings Point’s 230+ Sea Year midshipmen presently have only 14 commercial, operating, ships available to them for Sea Year and many Kings Pointers are being put on state school training ships in order to get required sea time.

Now let’s move forward to a March 2022 roundtable discussion convened by Congressman Tom Suozzi and attended by USMMA Board of Visitor members, House and Senate staffs, Department of Transportation leadership and Acting Maritime Administrator Lucinda Lessley. This blog had just run a post that criticized MARAD for allowing state schools to put their students on ships that USMMA midshipman are not permitted to use for Sea Year. Lessley announced at this roundtable that she had met with the state maritime schools earlier in the week, with some [and she emphasized that it was only some] of those schools committing that they “will not be embarking students on vessels that can enroll in EMBARC, unless the vessels are enrolled.”

Dissect that last sentence (which someone in attendance wrote down verbatim and sent to me): The state schools will not put students on vessels “that can enroll in EMBARC, unless the vessels are enrolled.”

What about vessels that MARAD has deemed cannot enroll in EMBARC—e.g., the 129 vessels with the red circle X’s in the pie chart at the top of this page)?  The state schools have made no promise to MARAD about not using those vessels. Cui bono?

As SUNY’s Alfultis makes clear, the State Schools need some ships reserved for their “cadet commercial shipping” program. In fact, they need 50 commercial ships just for his school. So MARAD divvied up the pie: 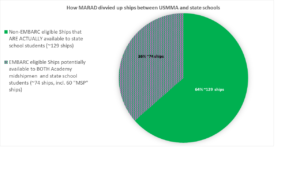 And if you think this is the first time the state schools have tried to take advantage of a Sea Year cancellation, then you need to visit the Kings Point Sentry archives.  Start with Part 1 of a series from 2016 and then go to Part 2, Part 3 and Part 4. Prepare to get angry. Very angry.

This is a pattern.