Bravo Zulu to Keith Mcliverty, the president of the USMMA National Parents Association, who has been keeping lines of communication open with Acting Maritime Administrator Lucinda Lessley. Keith has been raising the inconsistencies about “subject to SOLAS” and “SOLAS-compliant” that I have been posting about directly with Lessley. He has been giving her “simple examples” of Jones Act vessels that travel between US ports and voluntarily comply with SOLAS and asking her to confirm one way or another whether such vessels are eligible for EMBARC.

“That as long as they comply with SOLAS—which many of the Jones Act vessels do—they can enroll (in EMBARC) and MARAD would welcome their enrollment.” 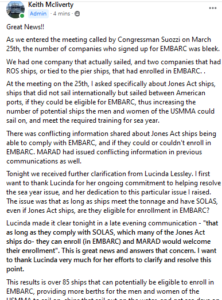 Although there are still major impediments to actually restoring Sea Year on board commercial, ships, the first impediment—MARAD’s refusal to allow  coastwise vessels to be eligible for EMBARC—is removed.

The ramifications of Lessley’s acknowledgement are far-reaching.  In yesterday’s post, I explained how some of the state maritime schools had committed to Lessley that they would not put their students on EMBARC-eligible vessels that were not enrolled in EMBARC. SUNY Maritime’s president, Admiral Alfultis, specifically made this commitment on behalf of SUNY and the other state schools in a telephone call with the USMMAAF’s president, Jim Tobin, and Mcliverty a few weeks ago. These were statements of faux solidarity. They made the state schools appear to be supportive. But as I disclosed in yesterday’s post, MARAD had  carved out 129 ships that were off limits to USMMA midshipmen but not to state school students and the promise from the state schools did not apply to those 129 ships since those ships were not “EMBARC-eligible” according to MARAD’s website and proposed EMBARC rule.

Now Ms. Lessley has confirmed that all commercial ships with SOLAS (so, essentially all 10,000 gross ton commercial ships) are EMBARC-eligible.  The exclusive access that the state schools had been given by MARAD to129 ships has vanished because the backdoor to those ships has been closed.

In other words, MARAD has the power of the purse.

And Title IX, which gives the federal government a huge say on SASH issues at colleges and universities, affirms that power of the purse. It gives agencies that provide funding to institutions of higher learning the power to terminate, refuse to grant,  or refuse to continue to fund, an institution that is not providing adequate safeguards against SASH for the institutions’ students. 42 U.S.C. § 2000d-1. (If anyone is interested in doing a deep dive into Title IX, a great USDOJ “explainer” is found here.) MARAD is the funding agency and therefore it has enormous control over what happens in the state schools when it comes to SASH. 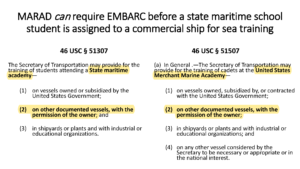 While I do not wish the misfortune of cancellation of Sea Year on anyone, if concern over student safety is truly the priority, it should not be used as a backdoor way to benefit the state schools. (Cui bono?) Thus, MARAD needs to apply and implement EMBARC equally to all maritime training institutions.

At least now that we are all in the same lifeboat, we can all start rowing in the same direction instead of taking advantage of the 129-ship situation to the detriment of USMMA midshipmen. Where do we row? All maritime schools (state and federal) should now be working with MARAD to develop a “bridge to EMBARC.” The EMBARC protocols as they are today can realistically take a year for companies to adopt. We cannot afford to suspend training on almost all commercial shipping for a year. That will essentially require midshipmen and students at seven maritime schools to have their graduations delayed by as much as a year.

It is time for MARAD to sit down with the stakeholders at the schools and develop some common sense strategies for restoring Sea Year now, while we all work together to make the Sea Year experience even safer in the future. Let’s all work together—MARAD, the state schools, USMMA, and industry—to sink sexual assault and harassment in the merchant marine. That is the common goal that has become utterly lost in the debate over the poorly-thought-out and hastily-imposed EMBARC standards.